FILMCLUB – A Kind of America 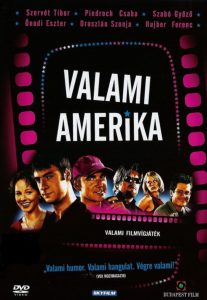 After the movie, Szonja Oroszlán, one of the main characters of the film, will be our guest.

A Kind of America is one of the most successful Hungarian comedies. Tamás is a young, Budapest-based director of video clips and commercials, who dreams of directing his first feature film with the title ‘The Guilty City’. He already wrote the script, but does not have the means of financing his project. His dreams come true when he surprisingly gets an email from the American film producer, Alex Brubeck. Alex likes the script and would like to meet him personally. With the help of his two brothers Ákos, a successful manager and sex maniac, and András, a poet and complete loser, he tries to make a good impression on the American and persuade him to finance his project. There are some surprises along the way…