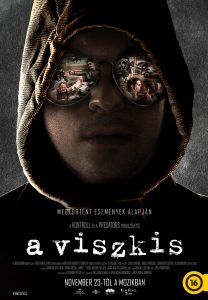 The movie is an adaptation of the real-life story of Attila Ambrus, a “gentleman criminal” often compared in Hungary to Sándor Rózsa, the country’s version of Robin Hood.
Attila grew up in Transylvania in the 1980s and escaped to Hungary illegally by riding underneath a freight train. We see how he becomes a goalie for a hockey team in Budapest and finds a girlfriend, Kata, whose bourgeois father dismisses him as hopeless, without a job nor much chance of getting one.  He turns to robbing banks, not once hurting anybody, and soon gains a reputation as a folk hero. The nickname comes from the smell of whiskey he leaves behind, as he always drinks before a heist – first simply to calm his nerves, but later, more to uphold his reputation.