Concert dedicated to the commemoration of the 1956 Hungarian revolution

Kormorán is a very popular folk-rock band in Hungary, their discography counts about 30 studio albums, while the whole number of records made with the band’s participation is now close to 100. Kormorán’s music, based on rare combination of folk tunes and explosive rock energy, is varied stylistically and thematically and has a lot to offer to prog-folk fans. Kormorán uses in their music elements of Hungarian, Mid- and East European folk. There are traditional songs, songs written by the band to their own lyrics and to the verses of different Hungarian poets. However, song-oriented albums is only one side of their music. The band released numerous rock operas, cantatas, and movie soundtracks. Orchestras, choirs, guest singers and musicians are often involved in such projects.
Kormorán was founded in 1976 by flute and wind instruments player and composer Gergely Koltay permanent band’s leader from the start to this day. 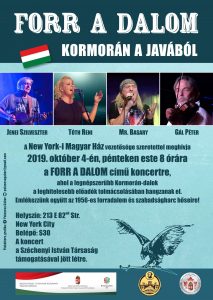