Please join us for a special concert featuring the music of Claudio Monteverdi & Béla Bartók.

The four singers of Monteverdi & Bartók practice the Libero Canto approach to singing, which was originated by Lajos Szamosi (1894–1977), who lived and worked in Budapest before the Second World War. www.liberocanto.org Two children of Lajos Szamosi, Edvin and Hedda, continued to develop their father’s work. Kinga Cserjési, a native of Budapest, who studied with Edvin Szamosi and is a licensed teacher of Libero Canto, is the musical director, together with Deborah Carmichael, of the Monteverdi & Bartók program. All pieces by Bartók, as well Hungarian traditional songs, are sung in Hungarian.

Monteverdi & Bartók is a program of vocal and instrumental music by two composers of extraordinary genius. Claudio Monteverdi (1567 – 1643) and Béla Bartók (1881 – 1945) lived more than three hundred years apart, and share neither language nor culture, yet this unique program weaves together their two musical worlds and reveals not only their differences but also their common ground. Each of these two composers was revolutionary in his time, deeply rooted in a tradition yet creating new musical forms.

Monteverdi & Bartók is performed by an ensemble of 4 singers, 2 violins, cello, and piano.

Guest appearance by members of the Choral Society of the Hamptons:

“It’s rare to hear this kind of music making. I loved the concert so much that I want to tell all my friends about it!” Audience comment 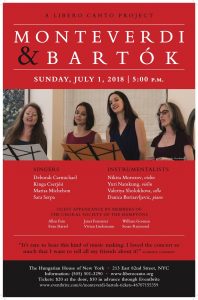